Like most boys his age, 14-year-old Abram “Abe” Stirtz has a keen interest in computers and the Internet. However, Abram is equally proud of farm life and the role he plays there. Fortunately, Abe has found a way to combine both interests on his parents’ farm near Enterprise, KS.

Having been through a number of surgeries to correct birth defects, Abe has always been limited in certain school activities and athletics. So it was only natural for his creative talents to blossom instead. Abe has developed a YouTube channel and an Instagram account that showcase agriculture and the activities on Stirtz Farms, Inc.

“Right now, I have 301 followers on YouTube,” Abe exclaims. “Most of them are in the U.S. and several of them are kids at my school,” he adds. “But I know there are also some people in Canada who follow my videos, because my mom is from Canada.” 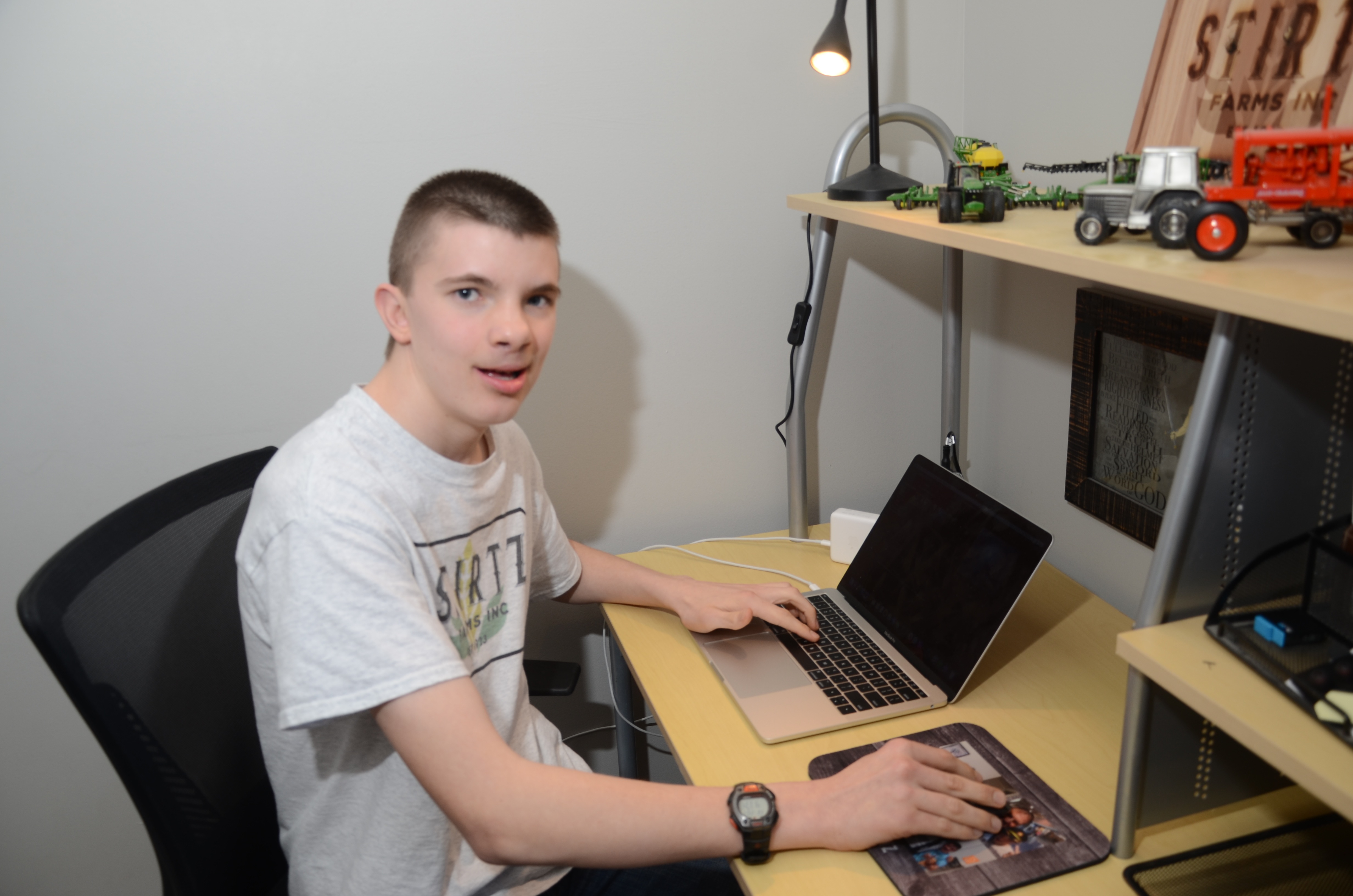 Abe Stirtz combines his love of farming with his love of filming, shooting videos of Valley center pivots and other agricultural topics for his YouTube channel.

There’s certainly no shortage of material to film, either. With the help of Abe, one full-time employee and 10 Valley® center pivots, Ryan and Sarah Stirtz grow four different crops on 2,600 acres. Abe’s videos cover everything from maintaining and repairing equipment to planting and harvesting crops and filling in center pivot wheel tracks.

For Ryan, the videos serve to chronicle the hard work and struggles farmers go through, and as a reminder of the farm’s earlier days.

“My grandpa started the farm back in 1923 with a hatchery and poultry operation,” Ryan explains. “Throughout the years, we’ve also taken advantage of the water from the Smoky Hill River, which borders much of our property. As they say, ‘You live by the river and you die by the river.’ And last year was one of those years we nearly died.”

No thanks to nearly 10 inches of rain that fell up-river, much of the farm flooded this past year, making it difficult to maintain a planned rotation.

“I do have some wheat under a pivot this year that I plan to double-crop with a short-season corn, in part because I got tired of looking at dead vegetation after the flood,” he says. “However, all the corn and part of the soybeans are under pivot irrigation.” 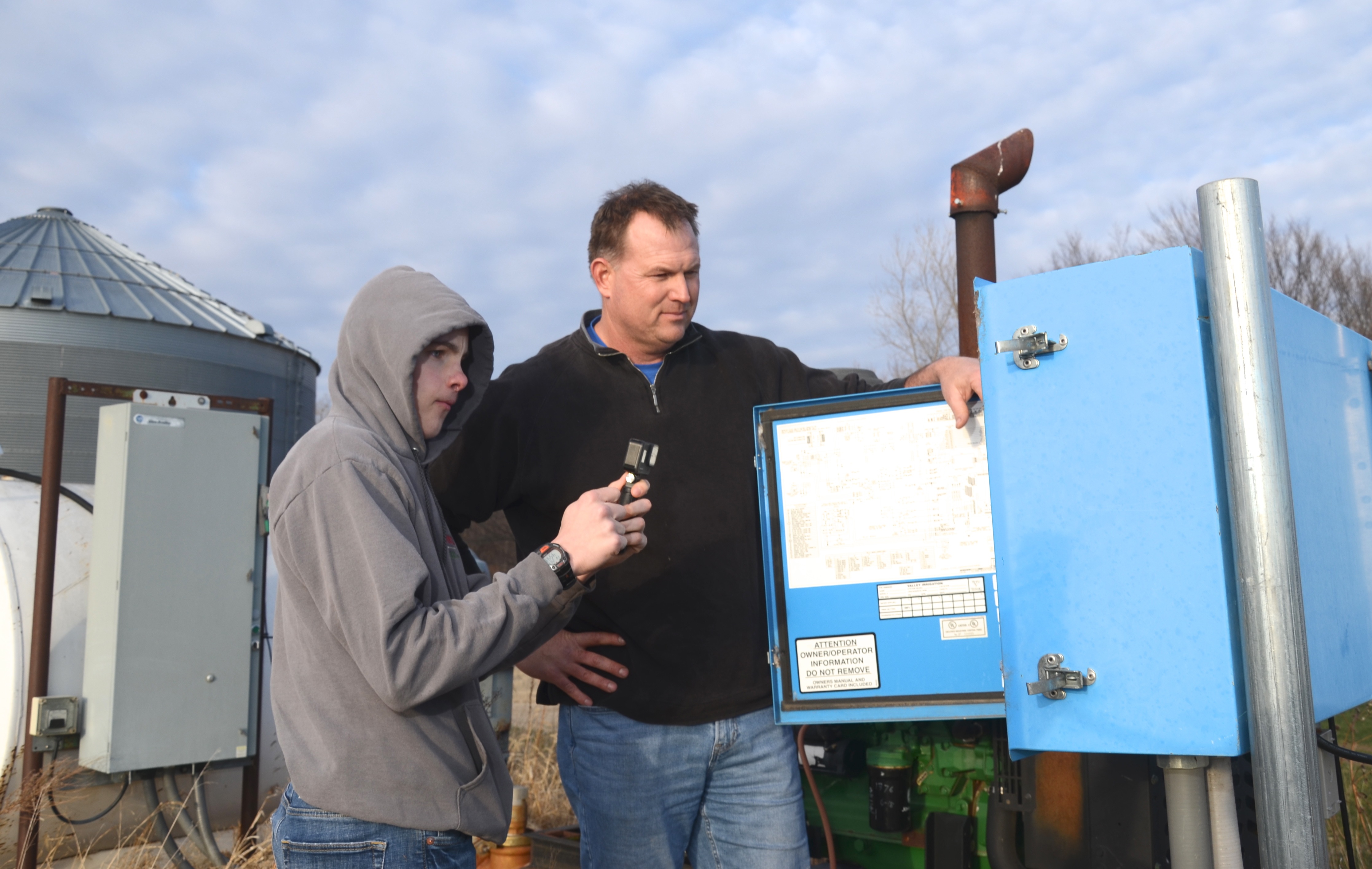 Abe and his father, Ryan Stirtz, rely on Valley technology to help them save time and resources.

Ryan says the Valley systems have been particularly valuable since the loss of his father three years ago, not just because of the increased production and flexibility, but also because of their time saving capabilities.

“Dad was always helping on the farm,” Ryan says, noting that his parents were still living on the farm at that time. “Fortunately, as Abe has gotten older, he’s been able to provide more help. Plus, the Valley systems have helped with time management.”

Time is important to growers everywhere; there are never enough hours in the day to do it all. “We used to have one field that was still flood irrigated; but that just took too much time. So now there’s a pivot on that one, too,” Ryan continues. “In addition, all of the pivots can either be monitored remotely or completely controlled with my cell phone, which means I don’t have to drive to the farm or from one pivot to the other to check on the status,” noting that he actually lives five miles away in Abilene. “Of course, Jake with Inman Irrigation has provided us with tremendous support, as well.”

Of course, no matter what Abe is doing to help at the time, he always has his video cameras with him. In addition to two GoPro video cameras, Abe also has a Nikon Coolpix that shoots both photos and video. His newest ‘toy’, however, is a drone equipped with a camera.

“I’d really like to get an overhead video of one of our pivots spraying water on a field,” he says. “I think that would be cool. It wouldn’t have worked last year, though, because we didn’t have a single field with a pivot that didn’t have replants or bare spots due to the flooding.”

That doesn’t mean he hasn’t gotten some unusual video with the drone. Last fall, for example, Abe took the opportunity to run his drone above the combine and alongside the grain cart as the combine unloaded on the go.

“It makes you a little nervous when you look up and see a drone flying just above the header,” Ryan says. “That’s kind of an expensive item to run through the combine.” 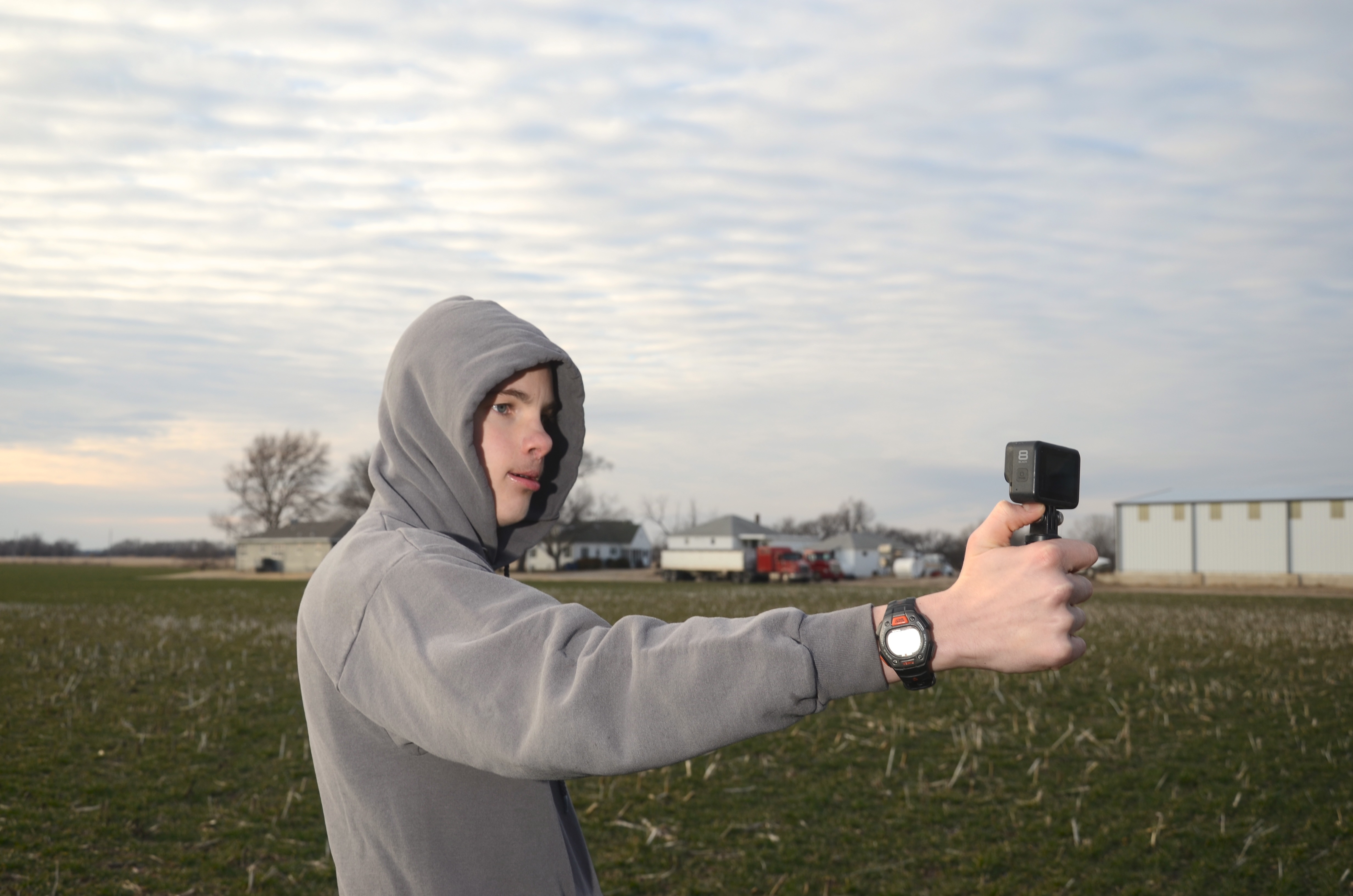 Abe Stirtz is becoming even more of an advocate for agriculture, sharing his videos with people as far away as Canada.

True to his farm background, Abe seldom takes a day off. “I try to post at least one video a week during the winter and about two per week during the rest of the year when we’re farming,” Abe says. “There’s always something new going on, so once I’ve shot video of whatever we’re doing, I come back to my room and edit it down to about 20 minutes and then schedule it to upload.”

“As Abe grows older, the content in his videos becomes more in-depth and he becomes even more of an advocate for agriculture,” Ryan concludes. “With his skills, I see him being able to do quite well in that field.”

For more information on how Valley can help your operation save time and resources, contact your local Valley dealer today.


ABOUT VALLEY IRRIGATION
Valley Irrigation is the worldwide leader in precision irrigation. The Valley brand of center pivot, linear and corner equipment provides solutions for conserving water and meeting the growing demand for food.