A Long and Winding Road: Irrigation Innovator Looks Back on His Career at Valley

Jake LaRue has traveled the world to consult on all aspects of irrigation, and has been awarded several patents for his work for Valley®. He’s even worked with “cosmic ray neutron probes,” which sounds like something out of a superhero movie. But it wasn’t always that way. He started much smaller.

The Director of Research & Development began his career with a local Valley Irrigation dealer in Fargo, ND, as an Application Engineer in 1976. In that role, he worked on pipeline and drainage design and developed an irrigation scheduling business. “Scheduling was surprisingly similar then to what exists today, but was a manual process,” he said. “The fundamental calculation and science hasn’t changed, but the technology has.”

Jake LaRue's career spans five decades and several continents, but he's most at home in the field, helping growers.

From there, he went to another dealer doing basically the same work (Application Engineer), and managed the irrigation on about 15,000 acres for large and small clients. This was in the days before remote telemetry, so he drove around. A lot. “There was no email and no fax,” he said, “but we did have a pretty good two-way radio.”

He left that dealership in 1982 when the domestic irrigation market collapsed, then spent a year managing a farm for a large organization, but says that really wasn’t what he wanted to do.

In the mid-1980s, Valmont recruited Jake to go to Saudi Arabia for Valley dealers Al Khorayef, who at that time sold more than 1,400 pivots a year.

Leaving behind his wife and three small children to be gone 6-8 months at a time was not ideal, but he “had bills to pay, I wanted to stay in irrigation and Saudi Arabia was a unique market.”

When he started there, the Saudi government was paying $28/bushel for wheat ($73.43 in 2018 dollars). There were also little to no interest payments and long payback terms. In Jake’s words, one “had to be a very poor farmer not to make money.”

He admits he was fearful at first. “I’d hardly been out of North Dakota, but (travel) is something you get used to,” he said. “Farmers are farmers anywhere around the world.”

In his time in Saudi Arabia, Jake also became involved in corrosion prevention because the water pumped came from deep within the earth and often was of poor quality.

Jake LaRue is most proud of the work he did on the team that made Pro2 irrigation control panels more reliable than their earlier iteration.

Jake left Saudi Arabia in 1985, primarily because it was difficult to be away from his family so much. He had started graduate school when he received an offer to do overseas contract work for a consulting firm. From 1986-89, he performed feasibility studies, design, installation and start-up for farm operations in Jordan, Venezuela, Colombia and Guatemala. And further feasibility and design for projects in Kenya, Brazil and Zaire for American Ag International, racking up “lots of air miles.”

In late 1989 Jake was employed by Valmont as an Application Engineer for Ellis Industries in San Antonio, TX, and did design and application work for projects in Argentina, Ecuador, Colombia, Central America and Mexico, working on center pivots, linears, side rolls, and even large drip irrigation systems.

When asked if there were interesting stories from his work in other countries, Jake chuckled and said, “We don’t have enough time.”

Home Away From Home

In 1995, he came up to Valley, NE, as – you guessed it – an Application Engineer, working on wastewater projects for municipal, industrial and agricultural entities. Putting his Saudi experience to use, he also spent a year working on corrosion, and that was about the time Valley started developing their patented PolySpan®.

Over the next 20 years, Jake was involved in nearly every aspect of Valley Irrigation’s ongoing product development. Here is just a partial list of his duties and accomplishments:

· He developed a model for analyzing water chemistry and made recommendations on the life expectancy of galvanizing.

· In the mid-to-late 90s, Jake earned his first patent, for a slurry manager, an invention designed to handle livestock waste with high solid content while maintaining uniformity of application.

· In 1999, he earned a Professional Engineering designation from state of Nebraska.

· In 2001, he worked as a Product Manager, working on Pro2 panels, BaseStation and linears.

· He was awarded a patent on an exclusive method of growing rice with center pivots. The testing ground was in boot heel of Missouri, Arkansas and Texas, but the concept was especially embraced in areas of Africa and Pakistan. It used half as much water, maintained yields and quality, and worked well on ground that wasn’t level.

· Beginning in 2010, he was heavily involved with Variable Rate Irrigation– Zone Control and Speed Control.

· Earlier, you read about Jake’s work on a cosmic ray neutron probe, a pivot-mounted, indirect measure of soil moisture. “The technology worked, but the manufacturer could never get the cost down far enough to make it feasible,” he explained.

· He worked on a standalone device measuring spectral bands off the crop canopy to gauge temperature, relative humidity and incoming solar radiation for all crops.

· He is co-developing infrared thermometry for VRI prescriptions.

· His most recent patent (two more are pending) is for a soil management system that uses sensors to monitor the soil and root health and then signals the control system to re-apply the product through the irrigation system. 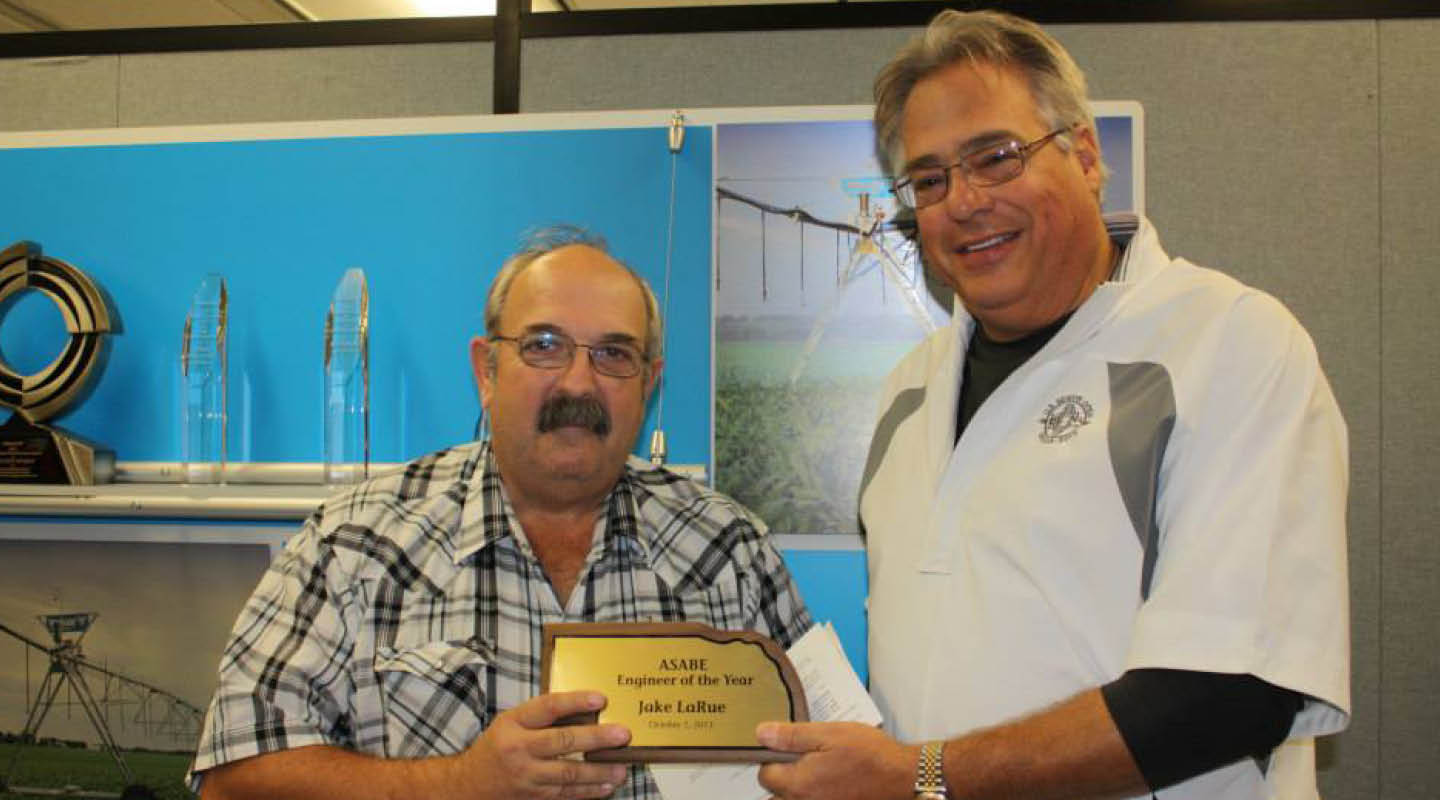 Jake LaRue has won numerous awards over the years, and has been awarded several patents for his irrigation innovations. Here he is pictured with Valley Irrigation President Len Adams.

Of all he’s accomplished, Jake is most proud of his work on smart irrigation control panels. He was on the team that developed the Pro2 panel, which corrected the problems growers were having with the original Pro Panels. “I fought for the 5-year warranty to prove to growers our belief in it. It was a big step up in reliability from the Pro, and adoption took off."

These days, Jake spends about 50% of his time in the office and 50% in the field, testing and collecting data. A majority of his time is currently spent on the partnership with Prospera Technologies.

A Farmer at Heart

Despite all his technological achievements – or perhaps because of them – Jake considers himself a farmer at heart, and is most at home offering agronomic support to average growers.

Jake says that people can’t really even fathom the changes that have occurred since he started in center pivot irrigation in 1976. “I helped install NEW water drives. First, everything was high pressure, then it was low pressure. Span lengths have changed, span design has changed…”

Those are big changes, but there have been bigger. “Technology has changed everything dramatically,” Jake said. “The biggest change is telemetry. Think of managing a farm in the 70s or 80s. We never knew when there was a problem. Or if it was raining, we didn’t shut off the pivot because there was no way to do it without driving to the pivot. Panels and telemetry made a huge difference.”

As for what will come next, Jake says the industry as a whole is not using the pivot to its full capabilities – yet. “Just selling steel doesn’t cut it anymore; today, growers demand package value.” He anticipates sensors on pivots, increased application of chemigation and nitrogen, and integration of machine learning.

All of this goes to show: an innovative company hires innovative people. Industry leaders employ thought leaders. Valley Irrigation is such a company, and Jake LaRue is such a person.

To experience Valley innovation for yourself, contact your local Valley dealer today.