Tips for a Successful Canola Crop with Center Pivot Irrigation

The canola crop is commonly grown to produce animal feed, vegetable oil, and biofuel, and is easily distinguishable by its bright yellow flowers. The following documents a case study of a canola farmer in the Czech Republic who used center pivot irrigation in one of the most arid areas of the country, which helped him achieve a higher than average crop yield.

First, the field was prepared and seeded to grow the canola crop. As the canola was the second crop in the rotation, the grower tilled the field to 10 centimeters (4 inches) immediately after harvesting the previous crop, then applied digested liquid from a biogas plant at 30 metric tons/hectare (446.09 bushels/acre). The grower then seeded with canola at 4 kilograms per hectare (3.5 pounds per acre) with a planter set at 9 meters (30 feet).

Throughout the growing season, the grower scheduled irrigation around weather events and crop needs, at an application depth of 10-40 millimeters (0.3-1.5 inches). The first irrigation was applied when the crop reached 30 centimeters (12 inches) in height; irrigation was also applied during the flowering stage and when the canola created silique. 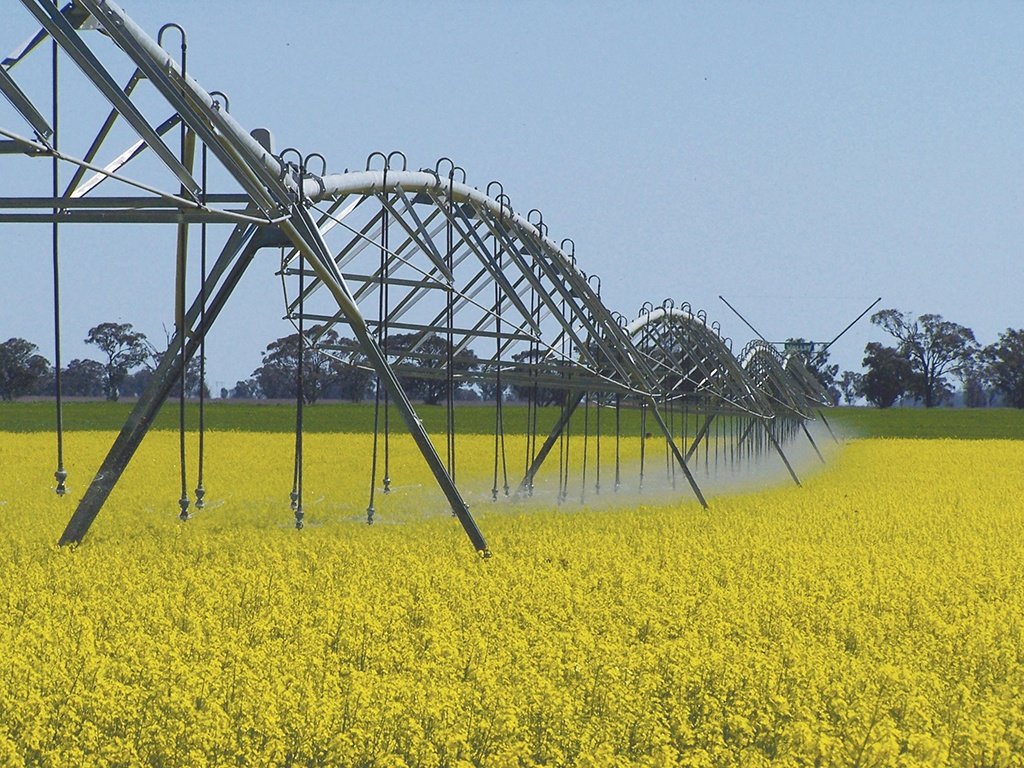 Several variables were controlled throughout the growth process to help ensure the crop succeeded by reaching a higher than average yield. The spring variety of canola was not used, as, even with center pivot irrigation, it will only yield half as much as the autumn varieties. Growth regulators were used to inhibit growth in autumn and winter. Insecticides and fungicides were applied, which resulted in a yield increase of +1.2 metric tons per hectare (+17.84 bushels/acre); should the applications of the insecticide and fungicide have been ignored, it can be estimated that the yield would have resulted in a negative 0.5 metric tons per hectare (negative 7.43 bushels/acre).

After the second dry season in this area, it is very hard to predict how the weather will continue in the future, and especially how the rainfall will be divided in the next growing season. Like the atmospheric rain, the price of this comodity also varied; its price on the market increased from 300 to 500 Euro per ton during the years of 2010 and 2012. The farmer harvested an amazing 3.7 ton per hectare (55.02 bushels/acre) from the fields where the past standard was 1.5 ton per hectare (22.3 bushels/acre) - that's an increase of 2.2 ton per hectare (32.71 bushels/acre)!. With the use of center pivot irrigation, the high profitability potential is present, as well is the high demand for canola.

The key to a successful canola crop is well-managed farming: preparing the soil, applying the optimal amounts of fertilizer and chemical, using a reliable water source, and saving energy and labor costs with the use of a center pivot or linear irrigation machine.