Center Pivots: Breaking Down the Machine

Center pivot irrigation has evolved into complex machines that do more than just move in a circle and pump water onto the ground. But even with all the complexities, a modern-day pivot can be broken down into a handful of main components that make up the core framework. These major components include the pivot point, control panel, spans, drive units, and tower boxes.

The pivot point anchors the machine to a permanent location in the field. Not only is it an anchor, but it also houses a system of subcomponents that contribute to the overall functionality of the pivot. These important subcomponents are the pivot legs, riser pipe, pivot swivel, control panel, J-pipe, and collector rings.

A) Pivot Legs - The pivot legs hold up the pivot point and give the machine its structure. The four pivot legs are typically bolted to a concrete pivot pad, providing support.

B) Riser Pipe - The riser pipe is connected to the first span through the pivot swivel. The purpose of the riser pipe is to supply water to the rest of the center pivot irrigation machine.

C) Pivot Swivel - The pivot swivel is an elbow-shaped fitting that connects the riser pipe to the first span.

D) Control Panel - The control panel is mounted and accessed at the pivot point. The control panel gives the machine commands to start, stop, move in reverse, pump water, and many other functions. More on this component later.

E) J-Pipe - The J-pipe houses the power and control circuit wires. These wires move through the J-pipe to the collector ring assembly.

F) Collector Ring - The collector ring assembly is made up of stationary brass rings with contact brushes that rotate around them. This assembly makes it possible for a continuous flow of electricity to run through the machine as it rotates around the pivot point. 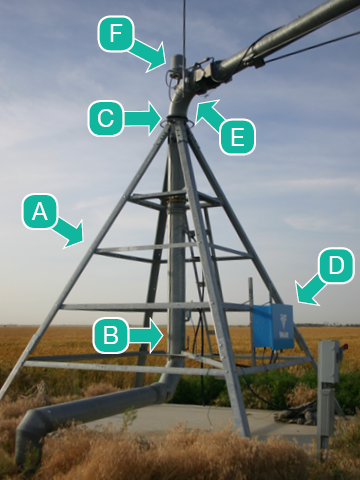 The control panel is the brains of the operation. It allows the operator to control the entire machine by sending commands to tower boxes mounted on each drive unit. The control panel controls the stopping, starting, forward and reverse movements of the pivot, water usage, and much more.

Spans are the backbone of the whole center pivot structure. Spans consist of pipes that transfer water to thefield via the pivot’s sprinkler package. The span pipes are supported by trussing and the drive units.

The drive units and the supporting structure are also known as towers. They provide clearance above the crop for the spans and control the movement of the machine. Each drive unit consists of a drive motor, gearboxes, wheels, and an electrical control box known as a tower box.

Each drive unit has a tower box that uses various components to control pivot movement and alignment. Span cables carry 120 and 480 volts of alternating current (VAC) to each tower box. Tower boxes then send 480VAC to the drive motors when signaled to move by the 120VAC control circuit.

Did you enjoy this article? Check out these next!

How a Center Pivot Works
Get Unstuck: Overcoming Your Stuck Pivots
Do Your Center Pivot Pipelines Last AS Long As They Could?